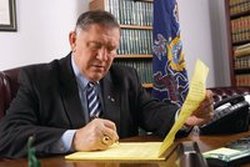 The James J. and Mary Edith Rhoades Foundation was founded in October 2008 in memory of Senator James J. Rhoades who was unexpectedly killed in an automobile accident on his way to a local high school football game where he was to be honored at halftime. Senator Rhoades' wife, Mary Edith, and children chose to establish this foundation to carry on Senator Rhoades' selfless spirit, highlighting his lifelong dedication toward education, giving and community for years to come.
​
Senator Rhoades served 28 successful years in the Pennsylvania State Senate. As a former educator, Senator Rhoades worked tirelessly on education issues and ultimately became Chairman of the Senate Education Committee. As chairman of that committee, Senator Rhoades had influenced education-related laws, including the Pennsylvania Safe Schools Act and the Head Start Supplemental Assistance Program. He also served on the Appropriations, Transportation, Law and Justice, and Environmental Resources and Energy committees.

Senator Rhoades believed in making everyone feel good about him or herself and making a positive difference in people's lives. This was evidenced by his passion for advancing the state of education in Pennsylvania. Senator Rhoades lived to provide "every boy and girl" in the state a better opportunity to learn, no matter where he or she lived or their socioeconomic status. He worked hard for the boys and girls, not for the glory.

And as a result, the children of this state are better off. Advances in education, like full-day kindergarten, Head Start funding, Distance Learning, and articulation agreements with colleges are some of his education achievements and now, his legacy.
​
Senator Rhoades taught us that we can make the world a better place by taking care of each other and treating everyone we meet with genuine kindness and empathy. He listened when people spoke and believed that if you took care of the person next to you, your life will be better as well. The James J. and Mary Edith Rhoades Foundation was founded to carry on Senator Rhoades' character. Let us continue his legacy by doing the same. This region will thrive as long as each of us strives to be active participants in the community, dedicated family members, and supportive neighbors.